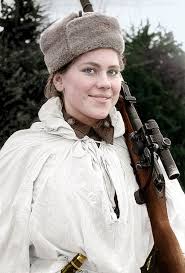 This week for Sniper Tuesday, we will be talking about Roza  Shanina 19 year Deadly Sniper.

Roza Shanina was a Soviet sniper during World War II who was credited with fifty-nine confirmed kills, including twelve soldiers during the Battle of Vilnius. Shanina volunteered for the military after the death of her brother in 1941 and chose to be a marksman on the front line. Praised for her shooting accuracy, Shanina was capable of precisely hitting enemy personnel and making doublets (two target hits by two rounds fired in quick succession)

In 1944, a Canadian newspaper described Shanina as “the unseen terror of East Prussia”. She became the first Soviet female sniper to be awarded the Order of Glory and was the first servicewoman of the 3rd Belorussian Front to receive it. According to the report of Major Degtyarev (the commander of the 1138th Rifle Regiment) for the 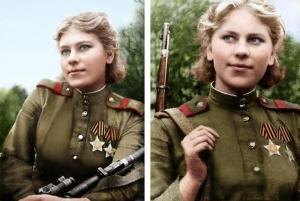 corresponding commendation list, between 6 and 11 April Shanina killed 13 enemy soldiers while subjected to artillery and machine gun fire. By May 1944, her sniper tally increased to 17 confirmed enemy kills, and Shanina was praised as a precise and brave soldier. The same year, on 9 June, Shanina’s portrait was featured on the front page of the Soviet newspaper Unichtozhim Vraga.

When Operation Bagration commenced in the Vitebsk region on 22 June 1944, it was decided that female snipers would be withdrawn. They voluntarily continued to support the advancing infantry anyway, and despite the Soviet policy of sparing snipers, Shanina asked to be sent to the front line. Although her request was refused, she went anyway. Shanina was later sanctioned for going to the front line without permission, but did not face a court-martial. She wanted to be attached to a battalion or a reconnaissance company, turning to the commander of the 5th Army, Nikolai Krylov. Shanina also wrote twice to Joseph Stalin with the same request.

In the face of the East Prussian Offensive, the Germans tried to strengthen the localities they controlled against great odds. In a diary entry dated 16 January 1945, Shanina wrote that despite her wish to be in a safer place, some unknown force was drawing her to the front line. In the same entry she wrote that she had no fear and that she had even agreed to go “to a melee combat”. The next day, Shanina wrote in a letter that she might be on the verge of being killed because her battalion had lost 72 out of 78 people. Her last diary entry reports that German fire had become so intense that the Soviet troops, including herself, had sheltered inside self-propelled guns.

On 27 January Shanina was severely injured while shielding a wounded artillery officer. She was found by two soldiers disemboweled, with her chest torn open by a shell fragment. Despite attempts to save her, Shanina died the following day near the Richau estate (later a Soviet settlement of Telmanovka. Shanina was buried under a spreading pear tree on the shore of the Alle River (now called the Lava) and was later reinterred in the settlement of Znamensk, Kaliningrad Oblast. 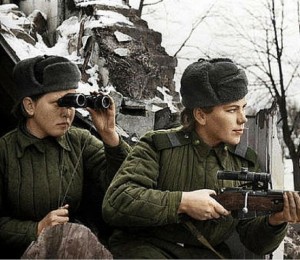 Wasn’t that awesome!  Every Tuesday we will be spot lighting Snipers, EDM’s  Until next week!