Do you collect Military coins?

This is great!  A little Military history for throw back Thursday!  Make sure you share.

For years, I have been carrying a military challenge coin in my pocket.   Because if you are at a military function or at parties and caught without one, it would mean you would have to buy a round for the bar or, well you know.

But where did the tradition of carrying a military coin all start?

For years the United States Military has a long-standing tradition of carrying a special coin symbolizing their units identity. With brother bonds that have been forged in battle, we carry these custom coins of our units, each bearing their own revered symbols and mottos.  We sometimes capture in these coins the essence of our affiliation and fierce pride. Known to generations of  American military personnel as challenge coins, they are a vital part of  military life today and are revered by troops in every branch of service (yes, you to Marine Corps!  lol…).

Today, not only the U.S. Military carries the challenge coins but are also carried by Police Officers and Firefighters.  And, wherever warriors  gather, they challenge each other by “coining.” The group’s unique coin is  slammed on a bar to challenge all in the group to display their own coins; he  who is last must pay a penalty.

We can trace the challenge coin to the Civil War and World War 1, because when a Soldier would leave for battle they would take a coin from home and put it in their pocket for luck.  But once they returned from battle they would keep this coin as a lasting remembrance of their wartime experiences.

Also you can see that American soldiers stationed in Germany after the war adopted that country’s popular  “pfennig check.” The pfennig was the smallest unit of German currency. When  someone announced a pfennig check, a soldier who could not produce one had to  buy a round of drinks for his buddies. 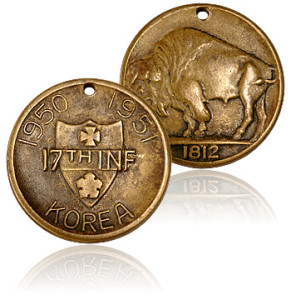 The coin shown above is the 17th Infantry Coin of Korea is one of the oldest pure Challenge coins in existence. COL “Buffalo Bill” Quinn, 17th Infantry Regiment, had them made during the Korean War.  The unit was formed in 1812. The Fort is a representation of the 5th Army Corp. badge in Cuba in 1898. The Cross is from the 5th During the Civil War.

The popularity of the challenge coin spread throughout the Vietnam War, inspired by U.S. Special Forces.  They minted coins to express the unique identity of their units.  Not long after that, other units wanted their own coin to build camaraderie and symbolize their pride of membership in an elite group.

Today a challenge coin is not just merely a token, but are a tangible source of pride for America’s warriors at every level in the chain of command. Commanders use them as on-the-spot awards.  Senior military leaders often dole out their coins as gifts to foreign dignitaries or civilian VIPs.

Most important, a challenge coin is carried at all times. Coin checks are still a part of military life, and various penalties are still handed out for those found without their coin. 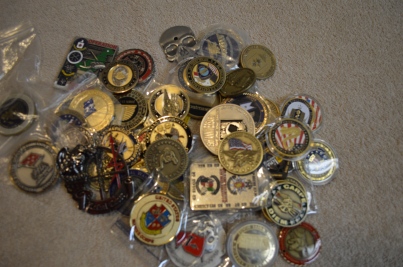 So, those of you who did not buy their coins anywhere, but was given to them (unit or award) I coin you! Post yours

2 Comments on “Do you collect Military coins?”