Driving center lane in a blacken out SUV somewhere in the Middle East. We have one SUV ahead of us and one behind us along with a couple of Humvee’s as tag along. My M4 is in my lap and a Sig Sauer P226 strapped in a thigh holster watching the streets and alleyways as we pass them. I was hearing over the radio that the cargo we were carrying was, “hot” and we needed to be on the lookout. Just then, “BOOM, BOOM” I see a large dust cloud come from the ground next to our SUV, “ping,” is the sound that hits my side of the door. Gun fire is what I was thinking, next thing I know our front right tire blows out and our SUV slams into the curve as it swings sideways. I hear, “ratatatatat” on the passenger side of the SUV and it is being riddled with bullets. I climbed out the drives side door where everyone was hiding from inside the SUV. As I looked over to my left I could see there was one of the our guys from the lead Humvee laying in the middle of the road and appeared to have been hit by several rounds and bleeding. I motioned to the guys standing next to me and told them to cover me as I go get him. I counted to three and took off after the guy in the road at the sound of my friends unleashing several powerful burst of gun fire. As I reached the fallen Solider I immediately grabbed the back of his plate carrier and started to drag him to the closest cover.
Next thing I know I feel this hard blow in the center of my back and throws me forward to the ground (knocking the wind out of me). My face was the first to hit the dirt, my lip is bleeding and my mouth is full of dirt. I roll over knowing I am still in the line of fire, I crawl back to my feet as I grab for the wounded Soldier and start dragging him again. This time one of the other Soldiers come out from behind cover to help me drag him to safety. As we continue to fire and get behind cover, I drop to my knees, because I am out of breath and in disbelief. My friend takes his hand and rubs on my back, sticks his fingers in two holes where two bullets struck my plates but did not penetrate through. He slaps me on the head and calls me lucky.

That day would be a day to remember not for grabbing the wounded Soldier laying in the middle of the road, but the fact of a good armor plate I was wearing. When people are going into the field whether it is in combat or piece keeping areas the one thing you do not want to stress about is wondering if your armor plate will withstand the bullet it says it will. I have found one company that stands behind their armor and when they say it last, will you can take that to the bank. The companies name is AR500 Armor. 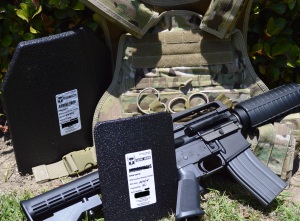 When SOF groups are looking for the best armor they look for AR500 Body armor and that is where I would like to put my money. I called AR500 Armor and talked with a sales guy name Tom and asked him why he thinks is plate carriers are the best.  Tom spilled the beans with me and explained everything I could think of that had to do with the carrier and plates.   Tom also said to me that once I received my Operator II and had any questions about it, that I needed to call him immediately so he can walk me through anything.  I love that about customer service, there to really help me and not leaving me hanging.  So I ordered and got to try out one of AR500’s plate carrier, their, “Operator II Plate carrier package that comes with a level III body armor pouches.
This Operator II Plate Carrier package is one of the most complete, fully adjustable, high value MOLLE plate carrier and level III body armor package that you will find out on the market. AR500 understands the value of finding the needs of threat protection and affordability towards the average person’s budget. When I received this plate carrier I found it had come with all kinds of loaded features that you would find on more expensive equipment but still has that high speed delivery in performance.
One of the features I really liked about the Operator II, was for each plate (front and back) had a retention strap inside each pocket allowing me to adjust right where I needed each plate to be giving me the maximum amount of cover when I need it the most. The inside material was made from wicking mesh which allows for maximum airflow to keep you cool when you are running up and down the range. Or that time in combat when you start to sweat, and need to be cooled off so you do not pass out. 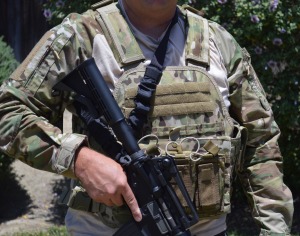 After working with this AR500 plate carrier I am finding out all of it’s capable of what it can and can not do.  But the more I push it, the more I find it doing a lot more than I thought it would.  The durability, flexibility and the fact it comes with level III plates was awesome.  I did find that most carriers do have adjustable shoulder straps so you can wear it comfortably, but not all have the large quick release buckles like this one has. These quick release buckles allows me the freedom to take it off in time of need so I do not drown as if I have to quickly go underwater as we are approaching the shore for beach reconnaissance and the boat is taking fire.
The Operator II has built-in side pockets to allow you to put in plates that are 6×6, which comes with the kit. Up where the admin pouch fits you will find a pouch that is secured by Velcro where you can store document and tools.
After having lots of fun with the Operator II, I have found it to be very light weight, cost effective, and loaded with Level III ( patent pending) Advanced Shooters 10” x 12” HIGHLY RELIABLE body armor plates. I took out one of those plates and went out to the range to shoot it just to see what it could do (we all have to).  I shot it with a 308 sniper rifle, M4 and a pistol and not only was it fun but the armor held its own.  This is what I would like to carrier in the field, armor that can take multiple shots and still keep going when I need it.   When you order your Operator II carrier you will find out that it comes with one MOLLE Double M4/AR15 magazine pouch (4 mag capacity), and one MOLLE Double universal pistol magazine pouch (2 mag capacity).

Operator II Plate Carrier Specs:
Weight: 2lb (unloaded)
Size: Fully adjustable shoulder straps and girth, Medium – XXL (up to a 54” Chest)
Colors: MultiCam, ATACS
AR500 Armor® Operator II Plate Carrier Features:
•Includes (2) AR500 Armor® Level III 10” x 12” ASC Body Armor Plates
•Includes M4/AR15 Magazine Pouch, Pistol Mag Pouch
•Includes Operator II Plate Carrier and removable Cummerbund
•Fully Adjustable from Medium to XXL (up to a 54” chest)
•Internal Plate Retention Straps allow adjustable and proper position of armor plates
•Quick release shoulder buckles for easy donning and doffing
•Built in Side Plate Pockets (6” x 6” or 6” x 8”)
•Fully adjustable padded shoulder straps
•Moisture Wicking Mesh Lining
•Ergonomic front and rear panels
•MOLLE based pouches allow for easy removal and reconfiguration
•Emergency Drag Handle
•Front and Rear Velcro panels for ID’s and Patches
•1000D Nylon Construction
After exclusively using the Operator II at a SWAT course I teach I can definitely say I gave it a fair beating and it has still held up to my standards. After adjusting it where I need it (plates and straps) I have found it to be the most comfortable carriers I have worn. I recommend you going over to their site and seeing what they can do for you, tell them you would like to talk with Tom in sales.
AR500 Armor website

← How Dirty Is Sniper Training?
M4 CQB-R Airsoft AEG Rifle made for the common Battlefield →