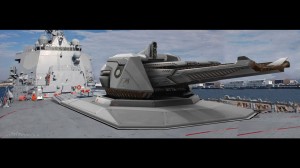 Railguns use bursts of massive electromagnetic energy to push solid projectiles at high speeds over great ranges without using gunpowder or chemical propellants. The U.S. Navy prototype is designed to push projectiles at six or seven times the speed of sound up to 100 nautical miles, far in excess of current navy cannon, which can shoot out to about 13 nautical miles. 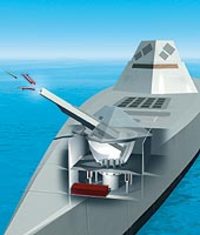 Earlier this year it was reported that the railgun’s development was a declining priority for the Pentagon and emphasis would instead be put on developing its associated high-velocity projectile for use by conventional cannon, which could fire it at twice or three times the range of conventional explosive projectiles currently in use.

The new testing developments suggest that the railgun’s development remains on track.

Until now the Navy’s railgun had been under development and testing at a U.S. Navy facility in Dahlgren, Virginia, but it lacks the range to test the weapon’s full potential. Last month a U.S. Navy railgun prototype completed installation and “shakedown” at the White Sands Missile Range, a 3,000 square mile testing site in the New Mexico desert that also hosted the first atomic bomb test during World War II.

Following the initial tests shots in New Mexico, a range official explained that “[t]he installation of the railgun began earlier this year and required a large effort for the mount, gun, power controls, displays, and functional ties into the range. The object of the test was essentially a shakedown of the newly-installed mount with accompanying power containers, controls and a fully functional execution team.” 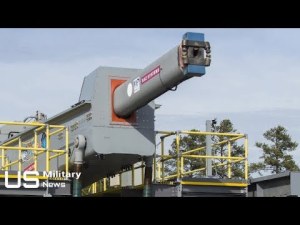 The Seattle Times newspaper discovered in a draft environmental impact study that the U.S. Navy may conduct at-sea testing of the railgun in a training area off the coast of the Pacific Northwest in the future. The studies examine the impact that various U.S. Navy activities such as the use of sonar or weapons training might have on protected species to mitigate damage to ecosystems and ensure compliance with environmental laws.

The draft impact study refers to the railgun as a “kinetic energy weapon” that releases stored energy in a short burst to accelerate a projectile. The impact study is for training that the Navy intends to conduct in 2020 or beyond, so it is not clear how soon the railgun might appear on an afloat testing platform.

The U.S. Navy envisions the railgun and its high-velocity projectile to be used across multiple missions, against targets on land, against other ships, and eventually in a missile defense role.

China has been testing its own railgun prototype at sea for a few years, mounted on a converted landing ship. U.S. intelligence reportedly estimates that China will complete its at-sea testing in the early 2020s and could deploy an operational weapon by 2025.

Thank you “The Diplomat” for the article:

← Have you heard about the 0180? ZT Knives Part 1
Elite SEAL Sniper JP Dinnell – An ORIGIN Film →