If you want to catch up on part one, Click here Intro to Zero Dark 30

On a clear moon lite night, as I stack next to the door, on the side where the hinges are located and seeing that the door will swing inward, I was in the right position for entry into the building. Thinking to myself as we prepared to enter, we must take this person alive.  Several guys on the team are lined up behind me, like we have done so many times before 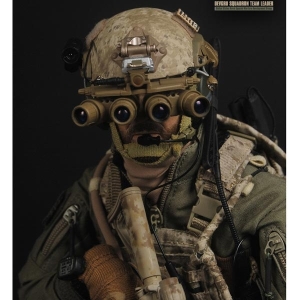 in training, with one guy standing opposite side of the rest of us ready to breach as I give word.  Waiting for the sign to enter, as it will be coming with a squeeze to my thigh from the guy behind me.  As each guy sets in his proper place in the line, and readies himself, he then squeezes the guy’s thigh in front of him letting him know that he is ready to move.  I know the sign is coming down the line closer to me, because the hair on the back of my neck is starting to stand up and I prepare for whatever may come my way.  Then suddenly I feel the squeeze on my thigh, “Ready” I knew, so I then motion my head up and down given the breacher motion to execute the breach.  The breacher blows the door handle off with his black Remington 870, pump action 12 gage shotgun.  I see that the door is open, already having the pin removed from the flash bang, I throw it inside the room.  “Bang!” I rush for the door pushing it open with my shoulder, riding inward knowing where my own section of fire is and where I needed go.  As I scan the room moving to my area of fire, I catch movement in the center of the room where I see the first contact.  I noticed this big stocky guy in shorts and no shirt standing there about 8 inches taller than me and twice my size reaching for his weapon; without hesitation I start yelling and running towards him.  He is not listening to me and grabbed for his weapon.  As he was bringing the weapon up in my direction, I pulled my trigger on the M4, only screaming in horror as Uncle Murphy welcomes me.  All I hear is a click! “Malfunction.” I thought.  He continued his motion upward raising the weapon towards me as I get to him.  Letting my M4 drop to my chest knowing that the strap will not let it fall to the ground, I reached out with my left hand grabbing his arm and redirecting his weapon to my left.  I then reached with my right hand and grabbed my Zero Dark 30 knife (from Top Knives) slashing  his tricep causing him to let go of the weapon.  As he reached for his cut I pushed him back and into the wall and watched him bounce off the wall behind him and grabbed his knife that he was holding on his belt.

We are standing in the center of the room almost like a knife dueling scene.  He made the first move coming into my space holding the knife in a reverse position (reverse grip. Knife blade towards the body).  Using all of his body weight, making the knife slash upward across my body missing me as I threw my body weight back and out of his way.  I watched him miss and then tried to recover by lunging in with a downward stabbing motion.  I parried and redirected the motion off to the side and came in with a horizontal slash across the top of his chest and through his shoulders.  He stopped for just a second, taking in the pain I had caused him.  I can see he was getting mad and uncontrollable.  He swung around with a wild slash as I moved in and……………..

Can’t go any further! Otherwise I am breaking the golden rule of secret within the military.  You will have to use the imagination.  Check out what TOP’s has to say:

For rugged performance and specialized use.

Final equipment check, The ramp opens and the light turns to 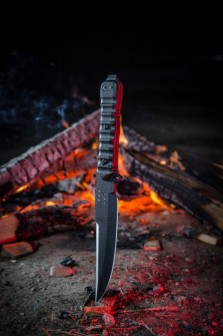 Another U.S. special operation is underway

This is a special operator’s choice tool, designed for rugged performance and specialized use. The hours of darkness. Many military guys know this as slang for very early in the morning. The original meaning was the last bottom of the hour before dawn. Also, 00:30 – Thirty minutes after midnight–used to refer to a very early starting time.

* Sharp Top Edge is Optional. Please check with your local and State laws. 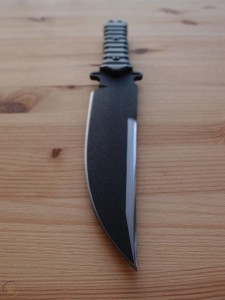 As we close the introduction of this Zero Dark 30 knife we want you to swing over to TOPS knives and check it out and get one for yourself.  Because in part 2 we will be showing you fighting techniques on how to use it!  Stand-by!